Our March 13 feature The Old Math (144 = 225) helped prompt this sequel, where we present more Chicago streetcar fantrip photos circa 1954-58. Except for one, these pictures are from the CTA Historical Photo Collection.

Even a partial list of those present reads like a “Who’s Who” of the Chicago railfan community in the 1950s. Here are some we were able to identify, in no partiucular order:

Included here are photos from a CERA farewell fantrip on May 16, 1954, two weeks before the Red Cars were officially retired by CTA; IERM (or was it ERHS?) and Illini Railroad Club trips on February 10, 1957; and the final red car trip, sponsored by ERHS on June 15, 1958. This was just six days before the last Chicago streetcar ran.

ERHS stands for Electric Railway Historical Society, a local group active from about 1952-73. You can read their story on the excellent Hicks Car Works blog here. ERHS published books and also helped preserve several streetcars. IERM is short for Illinois Electric Railway Museum, then located in North Chicago. Today, it’s IRM in Union, as the collection has been expanded to cover steam and diesel besides electric.

Yes, there were two Red Car trips on Feb 10, 1957 which was the farewell to Broadway (last car operated on Feb 15th). This was my first Red Car trip and I happened to be on the Illinois Electric Railway Museum charter which used 144. The Illini Railroad Charter with Maury Klebolt operated car 225. The reason that I recall that event is because after December 4, 1955, streetcars only operated southbound on State Street between Kinzie and Polk once route 36-Broadway/State was cut in half. Northbound Broadway cars went west on Polk to Dearborn; north on Dearborn to Kinzie, east on Kinzie to State and north on State. When 144 went south on State Street, I captured her on the State Street Bridge.

Klebolt’s trip caused a stir at CTA because he operated car 225 NORTH on State between Polk and Kinzie where no streetcar had operated since December 1955! This of course was against operating procedures at the time because streetcars were not supposed to operate northbound on State between Polk and Kinzie, but Maury was not the kind of guy to be told NO! He basically did as he pleased!

Looking at the Surface Division Track Map that I have from 1952, there was a crossover just south of Harrison on State Street which Maury no doubt used to get the 225 to go NORTH on State Street! The Railway Museum group was not bold like Klebolt, so they operated 144 south on State to Polk to Dearborn to Kinzie to State as they were supposed to do.

Actually Maury didn’t commit a cardinal sin so to speak because after May 30, 1954, there were no longer any Red Cars in service, only PCC cars. Since the PCC cars were not double ended, there was no way to reverse them on State Street after route 36 was cut in half. Only a double ended car like 225 or 144 could reverse ends on State Street and go back north. Maury had the chutzpah to do just that. It was amazing that the car could operate on the northbound track on State Street because the flanges must have been filled with dirt and gunk where no car had operated for over two years time. I didn’t see 225 operate there. I was just told about it. Sort of railfan folklore these days.

Yesterday’s Railfans peer out at us from these wonderful photographs, with their box cameras, Argus C3s and even the occasional 35mm or twin-lens reflex. The world was so much younger then, and the pace was slower, with much less “information overload.” Some of these people are still with us, and others have sadly passed from the scene. These are moments frozen in time.

As John Lennon famously said, “You only remember the good times.”

Car #479 on Schreiber (which is near Devon). (CTA Historical Collection) 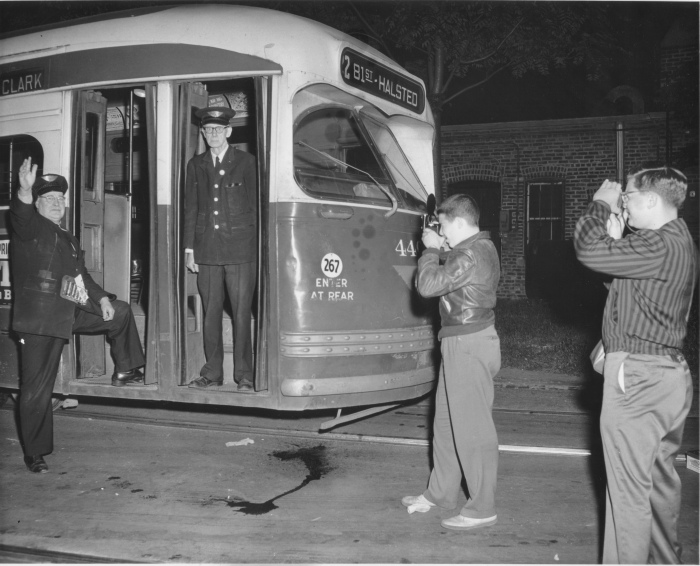 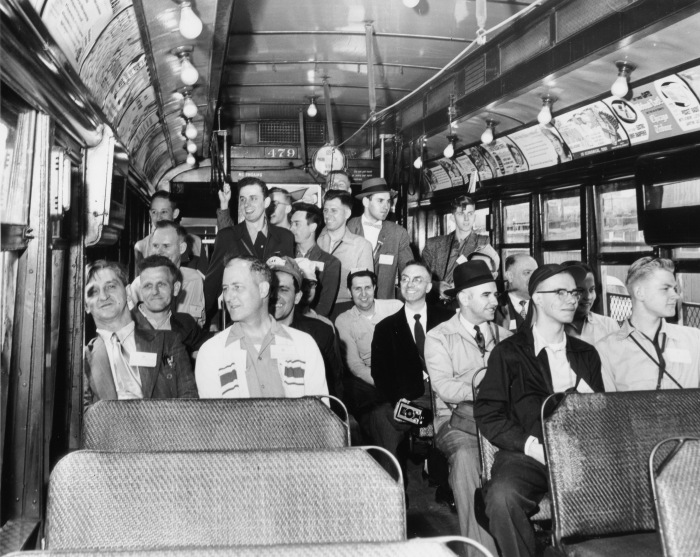 Car #225 on Clark Street, on an Illini Railroad Club fantrip, February 10, 1957. No, the car is not moving- this is a posed shot. (CTA Historical Collection)

Car #479 on Schreiber. This is the same photograph as one of our earlier shots, but with less cropping. (CTA Historical Collection)

Car #144 at Vincennes and 80th, on an ERHS fantrip June 15, 1958. The very last Red Car operated on the Chicago streetcar system. (Photo by Bob Selle)