The Great Subway Flood of 1957

Virgil Gunlock, CTA chairman of the board, looks at the 12 feet of water in the subway at LaSalle and Congress on July 13, 1957. (Editor’s collection)

Editor’s Note: All the recent rain in Chicagoland got us to thinking about earlier floods. We invited longtime CERA member Chris Buck to share this story with us:

In 1957 the Dearborn Street Subway Flooded.

My dad, Cecil J. Buck, known as Bud, worked for the CTA (and the CRT before that). He was an electrical engineer who advanced to the head of the electrical department before he retired. My brother, Dan, and I shared Dad’s interest in electric trains so we would often accompany him around the system when it was safe to do so. One place we went occasionally was to the storage tracks beyond the LaSalle street station on what is now the Blue Line. Before the Eisenhower (Congress) Expressway was built, The Dearborn Subway trains terminated at LaSalle Street. (The “tower” is still there at the crossovers just east of the station.) The tunnels continued west beyond the station to a point under the river and were used to store trains on the weekends. We were able to explore the 4000’s stored there. When the Eisenhower Expressway was being built and the subway was extended to meet it, we would sometimes accompany Dad on little weekend “inspection” trips through the unfinished subway.

It happened that while the expressway was still under construction Chicago experienced a lot of rain. The expressway began to flood. There are pumps that normally keep the pavement dry. They were in place and working although the roadway was not open. The problem started because the expressway cut was not landscaped. It was mostly mud, which washed down into the pumps and clogged them. As the water in the expressway rose, it found a ready drain in the new subway tubes. The water flooded into the subway.

Dan and I went with Dad to see how bad it was. The first access stairs we went down was flooded way above the level of the subway. Our second try took us down to the crossovers east of the LaSalle Street station. The subway opens into a “room” there which is two stories high. There is a walkway along the walls above the top of the tunnels. We could get to the walkway but the water was above the top of the tubes. The funny part was that all the lights were burning below the water. Needless to say we stayed well clear of the water. Our last look at the damage was from the south end of the Jackson Station under Dearborn Street. The water was up to the ties through the station. Looking south along the tracks you could see the tunnel disappearing down into the water, again with all the lights burning.

Dad told us later that the water had gotten to the point that high water alarms were going off in the State Street subway. The CTA asked the fire department to pump water out of the expressway but they couldn’t help because their pumps were not capable of sucking up water that far. Dad and others asked them to put their pumpers down on the expressway pavement and pump the water up. This is what they did and the water stopped rising. The State Street subway was never shut down.

When the Dearborn subway was finally pumped out, the work of removing all the mud and repairing all the electrical equipment began, and continued for quite a while. I will never forget the sight of all those lights burning away, under water. For many years one could see the high water mark along the tubes leaving Jackson Station.

The Chicago area counted property damage in the millions of dollars and a toll of at least nine dead yesterday as public and private agencies and thousands of householders struggled to recover from the impact of the heaviest 24 hour rainfall in the city’s history.

The Congress st. expressway was closed to traffic last night as 21 fire department pumpers worked steadily to lower flood waters that covered the roadway at Halsted st. Other pumpers worked on smaller bodies of flood waters at Ashland av., Francisco av., LaSalle st., and Oakley blvd. Fire department officials said the expressway might be opened today if there are no new rains.

Service on the Logan Square subway was returned late yesterday afternoon to its normal terminus at the LaSalle-Congress station, after fire trucks finished pumping water out of the flooded station.

The following day, the Trib reported:

Service was restored to the Congress and LaSalle st. subway, flooded by the record rain, and the first train since Friday night was sent thru.

(Editor’s Note: “Thru” was an example of the Chicago Tribune’s “simplified spelling” effort, which lasted from 1934-75. This had been championed by Col. Robert R. McCormick, although he did not start it. You can read more about it here.)

During the flood, service had been cut back to the Jackson station. I would guess that service was operated along a single track going back to the nearest crossover. The Congress portion of the line was not connected up with the Dearborn-Milwaukee subway until the following year. Until then, trains from Forest Park ran downtown on the Garfield Park “L” to the Loop. Part of this line was then operating on temporary street-level trackage on Van Buren Street.

The subways have flooded at least once since 1957. 35 years later, the old Chicago Tunnel system made famous by Bruce Moffat’s book “Forty Feet Below” filled with river water, which then inundated the State and Dearborn tunnels.

The Congress expressway only ran as far west as Laramie in 1957, as the portion crossing the Des Plaines River had not yet been built. This section required the right-of-way of the Chicago, Aurora & Elgin interurban, which had just “temporarily” suspended passenger service on July 3rd, less than two weeks before this deluge. The expressway was extended west in 1960. 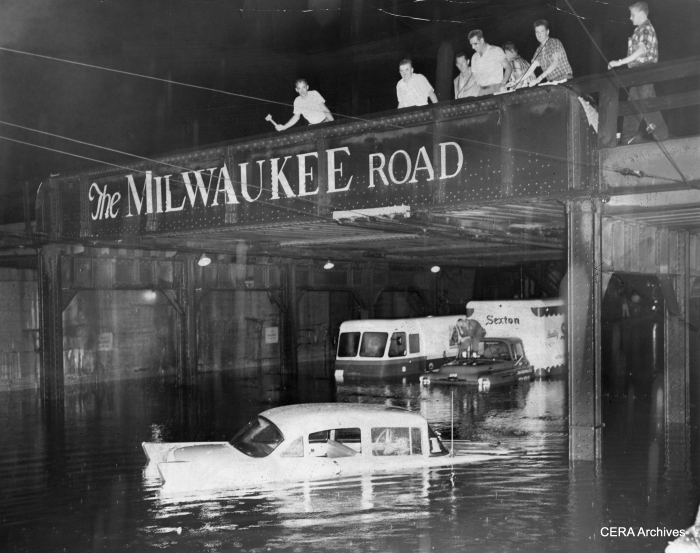 The CTA wasn’t alone on July 13, 1957. Here motorists are stranded under the Milwaukee Road viaduct on Cicero avenue near Grand. (Photo by Pauer) 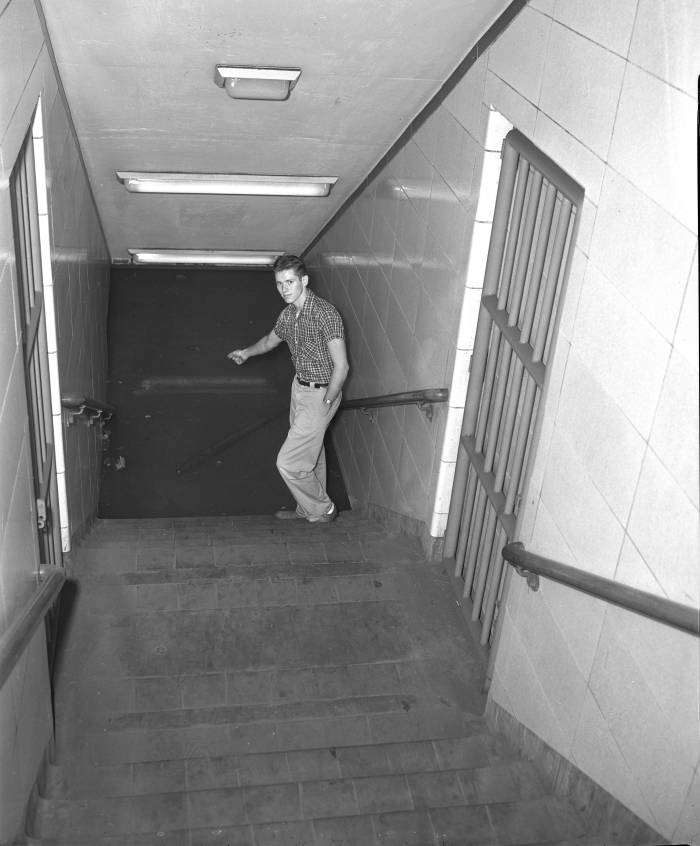 Dennis Headley, CTA ticket agent, points to the flooded subway at the LaSalle and Congress station on July 13, 1957. (Editor’s collection)

July 13, 1957: “The Congress expressway early Saturday looked more like a ship canal than a superhighway. This photo was taken at the expressway’s intersection with Ogden Av., looking east. The route was closed to traffic after hundreds of autos were marooned.” (Photographer Unknown) You can just barely make out a CTA train of 6000s running at left, on the Van Buren temporary trackage.

A close-up view of the photo above. CTA service in the expressway median did not begin until June 1958. (Photographer Unknown) 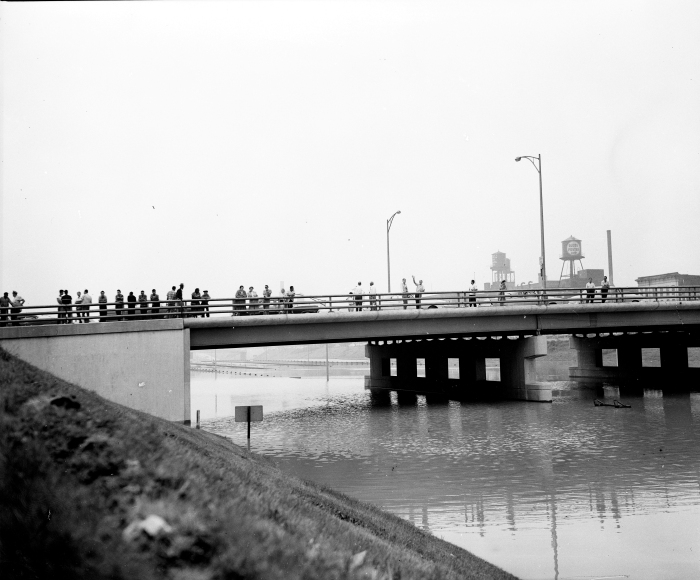 The Congress expressway at Halsted on July 13, 1957. (Editor’s collection)

Ist Division Fire Marshall Frank Tokars and a crew of firemen survey the pumping project on the Congress expressway at Halsted. Water was overflowing from the expressway in the CTA section where the “L” trains would tie in with the subway the following year. (Editor’s collection) 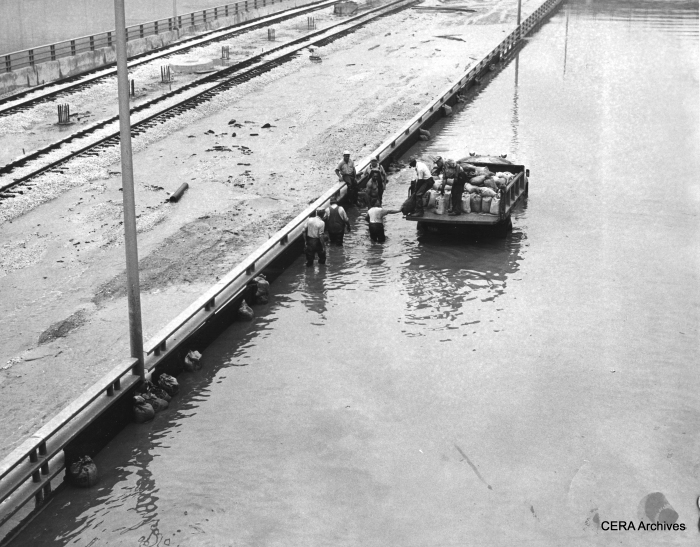 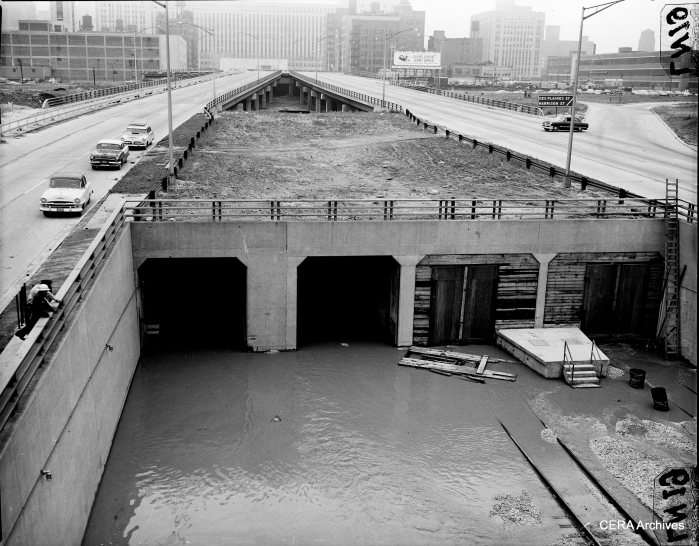 July 13, 1957: “Looking EAST on Congress st. expressway, from Halsted st. where the CTA L tracks will leave the expressway, and go underground, and tie in with the subway. Water flows into this section of subway.” (Photo by Larry Nocerino)

CTA sandbag crew, July 13, 1957. We enjoy having an opportunity to show the real working people of this country, whose contributions are often forgotten or taken for granted. 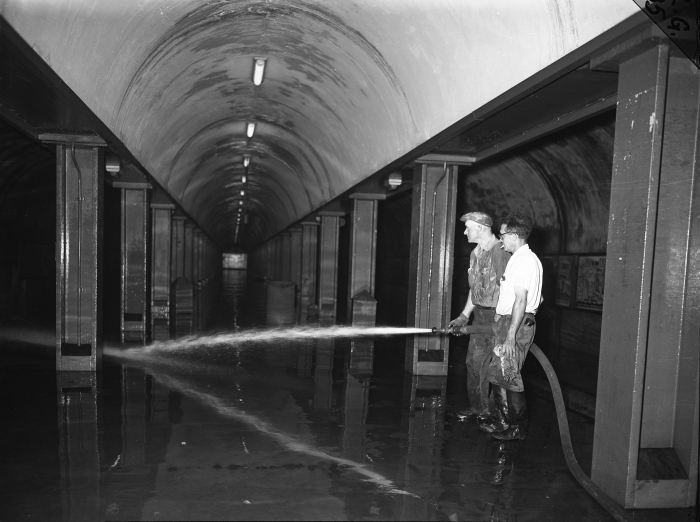 Workmen William Metzger and Dennis Moriarty wash down the muck left by the flood on the platform of the subway at Congress and LaSalle streets on July 14, 1957. (Editor’s collection) 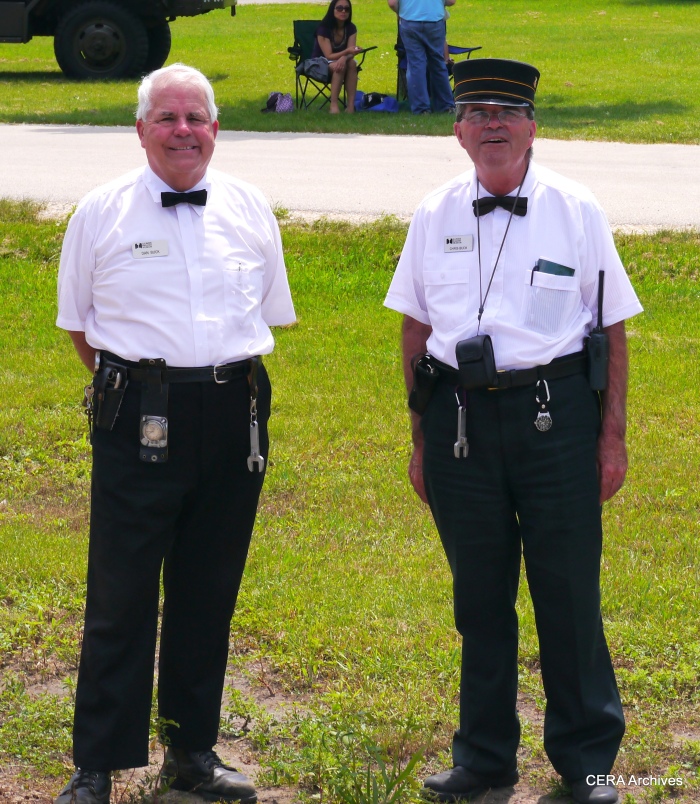 Brothers Dan and Chris Buck, who piloted the three-car train of CA&E steel cars at the IRM 2013 Trolley Pageant.