In this circa 1908 view, we see one of the Red Chicago Pullmans (I think the number is 400) before it was red. Streetcars had replaced the last Chicago cable cars just two years before. Until then, overhead wire was banned from the Loop because of concerns that it might start another Chicago Fire. That could be Jack Benny’s old Maxwell at right. 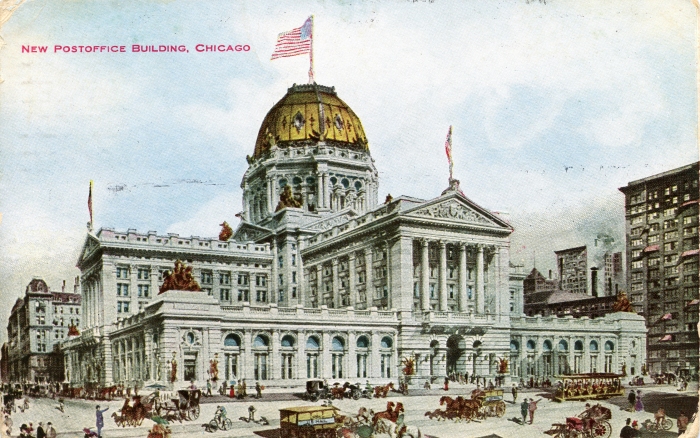 This is the present site of Loop Station, where CERA has a Post Office box. According to the Wikipedia (http://en.wikipedia.org/wiki/Chicago_Federal_Building), the Post Office moved into the Chicago Federal Building in 1904. Note what appears to be a cable car at lower right. The building was torn down in 1965.

May’s CERA program by Greg Borzo on the Chicago cable car system was well received. Mr. Borzo, author of a number of historical books, feels that our city’s cable cars were an important building block in transit past, but have been (literally and figuratively) “written out” of history. We had a capacity crowd of about 100 people on hand, and the audience and Mr. Borzo engaged in a spirited question and answer session at the conclusion of his presentation.

CERA has contributed a couple of Chicago cable car images to Greg Borzo that he had not previously been aware of. You can see one here, and the other is reproduced below. 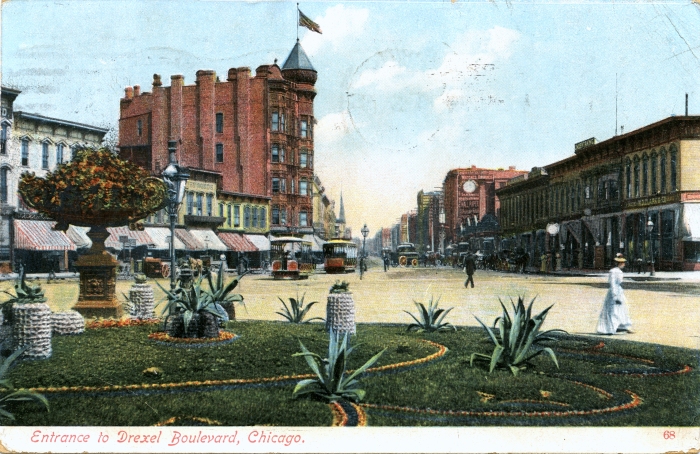 In this hand-tinted postcard, printed in Germany, we see a couple of Cottage Grove cable cars at center. Drexel Park Boulevard does not connect with Cottage Grove today, as it does here. According to Dennis McClendon, we are looking north at about 41st Street.

Our next program will be:

June’s membership meeting will consist of digitized 8mm films taken by the late Bill Hoffman during the 40s and 50s on the Chicago “L”. These films will be shown in an unedited format rather than as an organized program. The audience will be encouraged to participate in the program by calling out the locations as they appear on the screen. This will give the viewers a chance to participate in the program in a similar manner that has been developed on the CERA Members Blog. Come join us for what promises to be a fun evening.

Tickets are now on sale by mail and online via our web site. We’ve just mailed full-color brochures to CERA members for 2012 and 2013.

We’ve already received several orders for tickets and for additional copies of our retrospective publication, Trolley Sparks Special #1. This is sure to become a collector’s item. Everyone who attends our 75th Anniversary Banquet and Program will receive a copy. A limited number of additional copies are also available for pre-order via our web site. Books will be distributed in September. Reserve yours today.

Meanwhile, we discovered a Trolley Sparks prospectus from the late 1940s, that offers an insightful view into CERA’s early days: 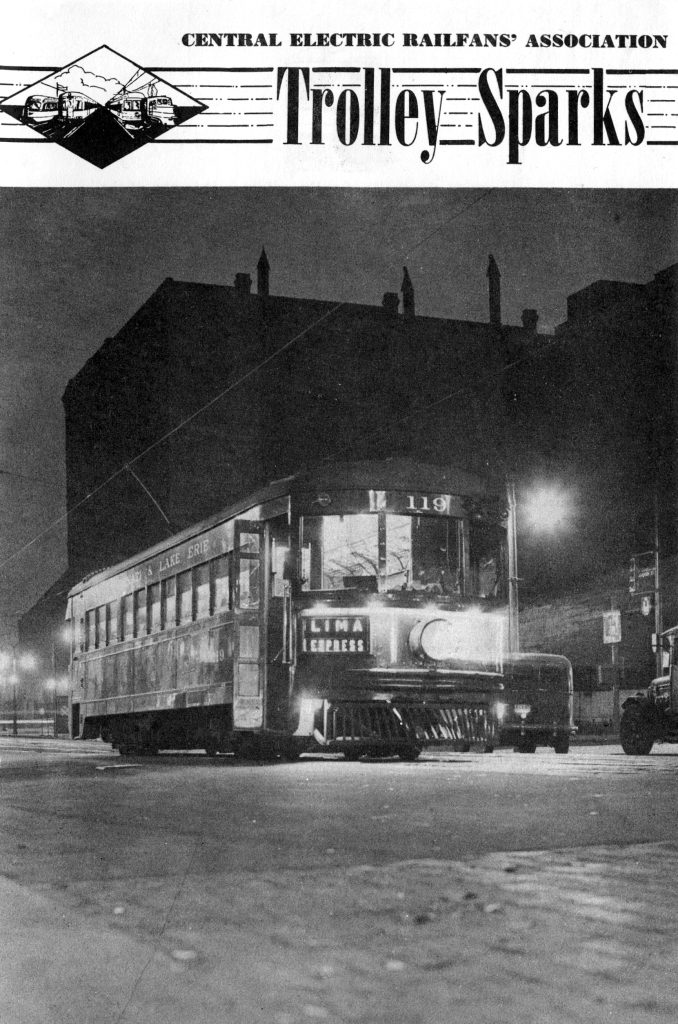 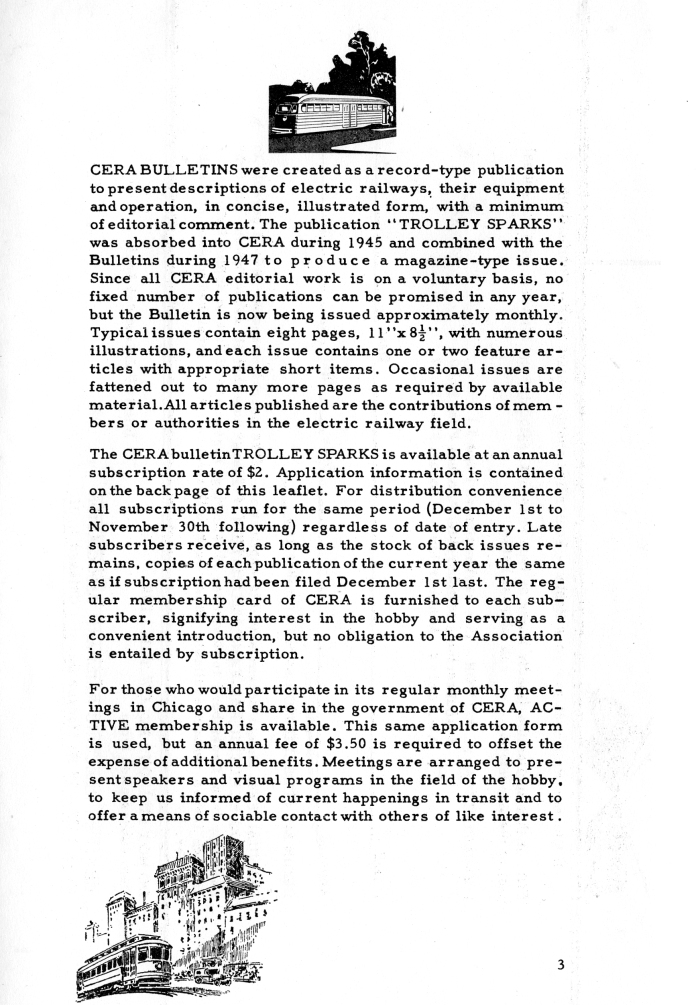 Keep in mind that prices have gone up a bit since then, but not too much when you take inflation into account.

Attached is a photo of a rather curious street car. I believe it to be a photo of a Blackpool (England) “Boat” tram. Can someone confirm this tentative identification by me, or if not Blackpool, the city in which it actually was. All I need is the city if that is all that can be found.

I did Google Blackpool Tram and I did find pictures of three preserved cars at Blackpool, two of which are operational, the third stored out of service. These cars do look like the one in the picture though the Blackpool cars now have windscreens. I think the B&W photo might be circa WWII or just after. For sure, it is in or near an industrial area as there is a gas holder in the background of the photo.

I seem to remember that there is Blackpool car preserved in the San Francisco Bay area; I can’t remember where this car might be in that city.

There is indeed a Blackpool “boat car” in San Francisco numbered 228. According to the Market Street Railway web site:

This streetcar turns more heads than any other in Muni’s vintage fleet. It brings smiles to so many who see it sail by — its nautical air whistle gaily tooting.

It comes from Blackpool, England’s venerable seaside resort, one of twelve built for that city in 1934. For many years, it ran along the coast to Fleetwood along the coastal promenade, sharing the tracks with a wide variety of unusual English-built equipment. In the fall, Blackpool trams are specially decorated for the “illuminations,” with elaborate lighting making the cars sparkle as the sun sets over the Irish Sea.

This particular tram actually crossed the Atlantic twice. In 1976, it delighted Philadelphians as part of that city’s bicentennial celebration. Returned to Blackpool, it sat unused because its wheel span had been widened to Philadelphia’s broad gauge.

After a sister boat tram was successfully leased for the first Trolley Festival from the Western Railway Museum in Solano County, Market Street Railway members went after one that Muni could own, and struck gold with car no. 228, which Blackpool donated to San Francisco as a gesture of friendship. Muni crafts workers restored the car to its Blackpool look and gauge.

You can also see some pictures of the boat tram taken in 2009 here. One poster there also commented:

Built 1934 by English Electric, ran in Blackpool England until being loaned to Philadelphia PA for use the during the US Bicentennial Celebration, was given to SF as a gift in 1984. More info about 228, and the rest of SF Muni’s historic fleet can be found at http://www.streetcar.org. On a side note another boat #226 is at The Western Railway Museum in Solono County CA. 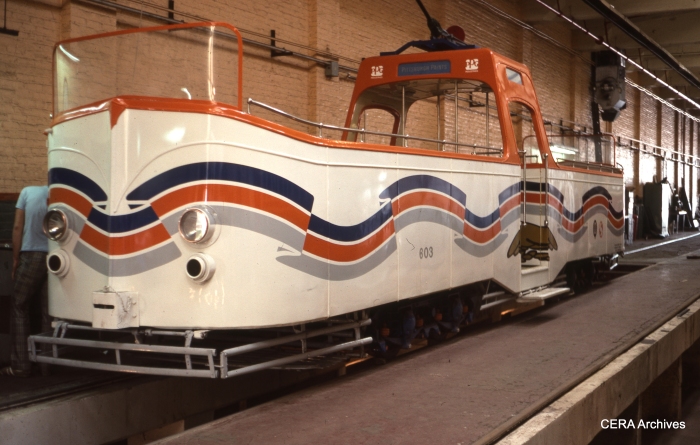 A Blackpool Boat Tram at Luzerne car barn in Philadelphia in August 1976.

John McLemore asks, “What became of Bulletin No. 142?”

CERA B-142 is Keystone State Traction: Pennsylvania’s Historic Trolley Systems, by Robert G. Lewis with Howard L. Stevens and William C. Vantuono, and with a foreword by William D. Middleton. It was published in 2009.

This book is out of print. It’s a very popular subject. I got my copy from a second-hand book dealer.

If any of our members need one, there is a copy of The “L”: The Development of Chicago’s Rapid Transit System, 1888-1932 (CERA Bulletin 131) by Bruce G. Moffat for sale in the used book department of a local hobby shop in Memphis, Model Railroad and Hobby Shop at phone (901)384-6500. It was in good condition and selling for $30.

They also had a copy of the bulletin (either B-107 or B-108 I think) on the North Shore with the Electroliner cover. It was in good condition, too.

eBay is another good source for out-of-print CERA bulletins. You can also try searching for them via http://www.bookfinder.com.