Following up on our earlier post about the Chicago & West Towns Railway, here are more rare views of that important suburban system (which survives today with bus service as part of PACE).

CERA published the definitive book about West Towns in 2006 as B-138. It is still in print and available for purchase here. The book (by James J. Buckley, and edited by Ricard Aaron) was based in part on an earlier bulletin issued by the Electric Railway Historical Society (ERHS), active from 1952-73.

ERHS was also responsible for preserving several rare railcars, including postwar Chicago PCC 4391 and Chicago & West Towns 141. Here, published for the first time, are some photos by Charles L. Tauscher of car 141 in 1959, being moved to a farm in Downers Grove. The Illinois Railway Museum acquired the car in 1973 and it has now been restored to operating condition.

You can read a history of the ERHS here.

It is fitting and proper to look back at car 141 as one of IRM’s numerous success stories as the museum celebrates its 60th anniversary with a banquet this weekend.

141 in transit to join the rest of the ERHS collection. (Photo by Charles L. Tauscher)

West Towns car 141 heading out to Downers Grove in September 1959. It joined the ERHS collection there before heading to IRM in 1973. (Photo by Charles L. Tauscher) 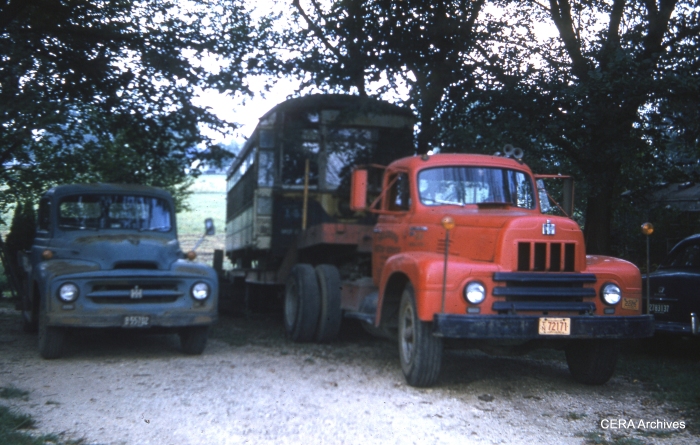 141 being delivered to the farm owned by Mrs. Lena Gnas. (Photo by Charles L. Tauscher) 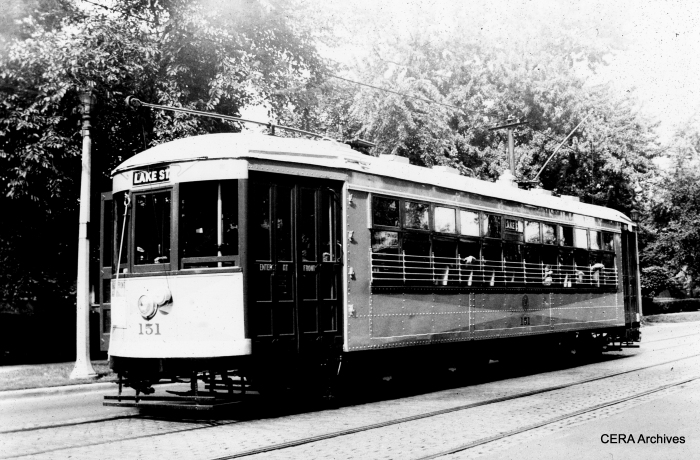 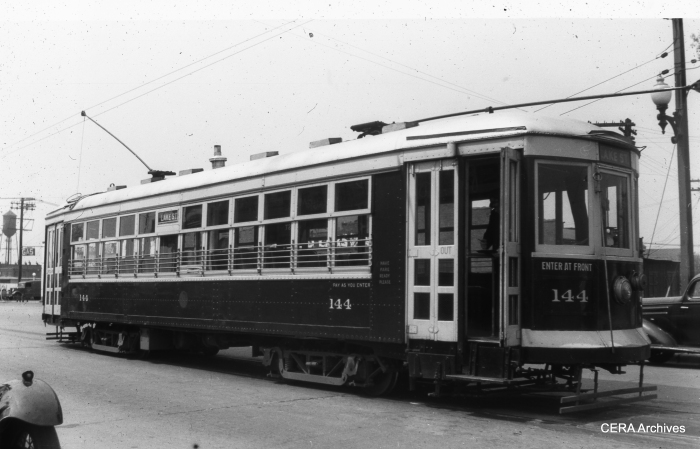 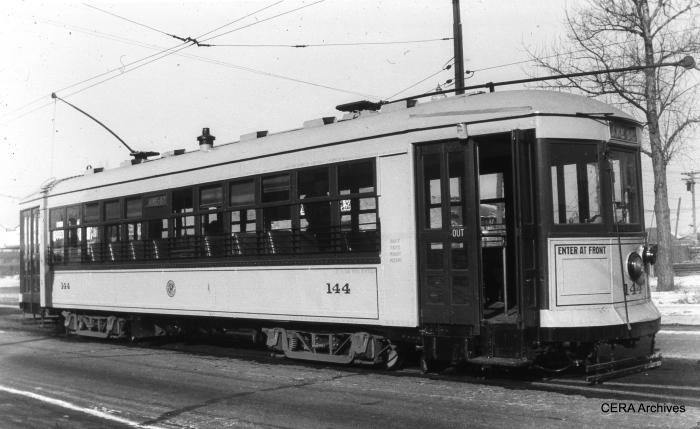 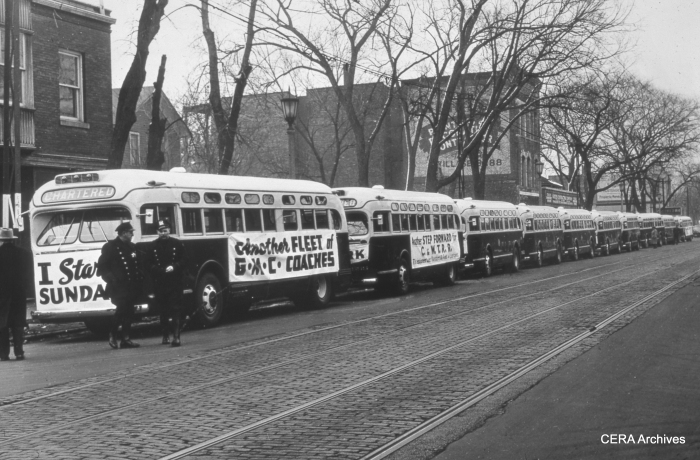 West Towns private right-of-way through the Forest Preserves. According to Michael Murray, this is “where the line crossed 1st Ave. just east of the zoo. That photo looks east toward the Des Plaines River crossing and Riverside.” (Photographer Unknown) 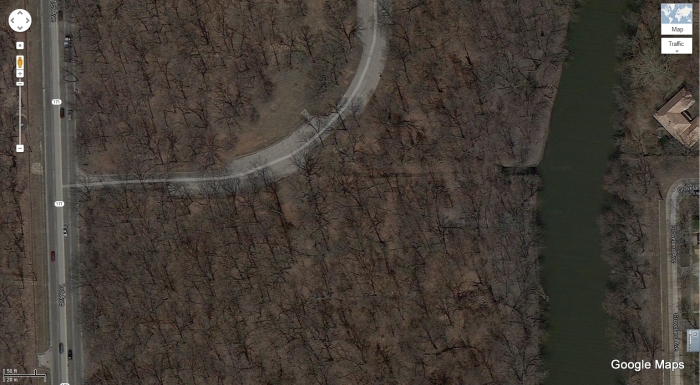 The old C&WT right-of-way is still visible in this aerial view of the scene shown above. 1st Avenue is at left. An access road into the Forest Preserves follows part of the r-o-w, which then continued straight across the Des Plaines River on its own bridge. We are south of 31st Street. 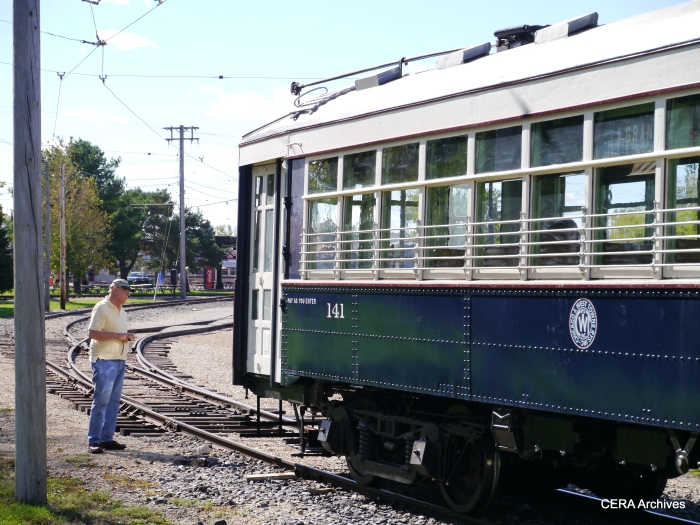 West Towns car 141 has been lovingly restored and is now operational again, for the first time since it last ran in 1948. (Photo by David Sadowski) 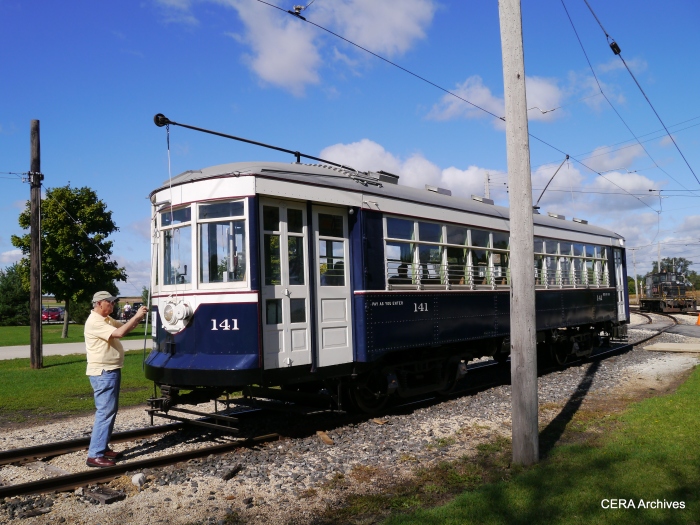 West Towns car 141, sole survivor of that street railway, at the Illinois Railway Museum on September 21, 2013. (Photo by David Sadowski)