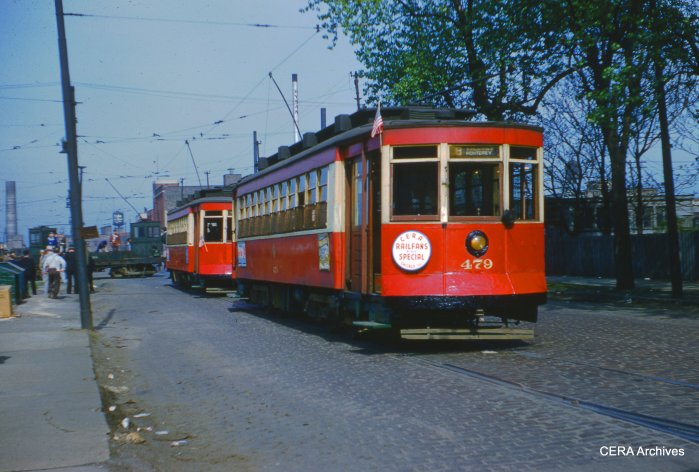 May 30, 2014 marks 60 years since the end of Red streetcar service in Chicago, thus closing a chapter of local history. CERA ran a fantrip on the five lines that were being converted to buses just two weeks before this. There were 102 people on that trip, and of these, perhaps only a dozen or so are still living.

Longtime CERA Member Bernard Rossbach organized this fantrip, which was the first of its kind for the CTA. We are honored that Mr. Rossbach will help us commemorate the anniversary on June 27th, when he will present a program about that historic fantrip. We will post more information about that program closer to the event.

Street railway service began in Chicago in 1859, with horsecars. Over the next 90 years, the Chicago system was gradually built up into arguably the greatest in the world. Unfortunately, it took only 10 years to dismantle that system, and the last Chicago streetcar, a PCC, ran on June 21, 1958.

2014 also marks the 100th anniversary of the creation of the Chicago Surface Lines. We will pay tribute to CSL in upcoming posts during June.

FYI, there was a delay of approximately three weeks in shipping our new release, the Complete ERHS Collection on DVD. This had originally been scheduled for shipment on May 1st.

We had originally been under the impression that there were perhaps 600-700 pages of material in the 49 bulletins issued by the Electric Railway Historical Society between 1952 and 1967. Ultimately, there were 1,826 pages, and to this we have added an additional 113 pages of bonus material for a grand total of 1,939.

This makes the collection an even greater bargain than ever at a total cost to you of just $29.95, including domestic shipping.

Apparently, many people agree with us, since we have received about 165 orders for the DVDs in little more than a month, a very encouraging response. We have been shipping discs all this week, and it will take us about one more week to get completely caught up on all the orders.

We thank you for your patience and hope you will be pleased with the results. We thought we might sell a few of these, and have been pleasantly surprised that the initial demand has exceeded all expectations.

The DVD cover art is designed to resemble those of the ERHS bulletins, and we are producing them in a variety of colors, just like the original publications.

We looked for cover photos that would tie ERHS and CERA together, and were fortunate to find some. ERHS bulletin #3 offers a history of the Chicago and West Towns Railway, and the organization preserved car 141 between 1959 and 1973.

Interestingly, now that C&WT 141 has been restored to operating condition at its current home, the Illinois Railway Museum, it will be formally dedicated at an event this Sunday (June 1st) at 1:00 pm. We hope to see you there.